“Toto, I have a feeling we’re not in Kansas anymore.”  ― L. Frank Baum

After a 7 hour flight from Paris to the capital of Gabon, Libreville, we disembarked the plane and got in line. Before leaving The Netherlands we had been sent a fairly detailed information about what was about to happen. We would enter the airport and head towards the line for people without a visa (we had to get it at the airport), there would be someone behind a glass window (at some place the line went by) who would hand us the original copy of Teun’s work permit and money to pay for it, and we would present this to the person who gave out the visas. Oh and everything is in French (and my 3 lessons so far aren’t really that helpful with real life situations…). Sounds simple. Getting in the line was easy enough. We showed proof of our yellow fever vaccine and followed the line until it stopped around 30 feet in front of the visa office. A few feet in front of us was an office, behind the desk in the office was a glass window with a bunch of people holding signs and shouting at the glass. Bingo, this where we need to get our paperwork and money from. So did another lady standing just in front of us. There was no one in the office and the door was slightly ajar. So the woman started to walk into the office. Then there was shouting (well more shouting than the normal level that was already ongoing). An armed guard standing next to the visa counter was yelling at the lady and looking very serious. I can only assume it was something along the lines of “get out of the office!” A minute later an airport worker walked by and locked the office door as the lady tried to explain about needing to collect something from behind the glass, which was ignored. Interesting, but the line wasn’t moving anyways so we waited. A lady holding paperwork and a piece of paper with Teun’s name on it spotted us looking anxiously at the glass and indicated she had our stuff. 10 minutes later someone else came and unlocked the door. The lady in front of us told her story to this person and after some discussion was allowed to come in and collect her documents from someone behind the glass. As this happened the the lady with our documents banged on the glass and got the attention of the airport worker indicating she had documents for us. Teun was ushered in to collect everything. Success! We then pushed our way closer to the visa booth, lines aren’t really a thing here. After standing around in front of the booth for a while an seemingly overwhelmed official called Teun over (he probably wasn’t next in “line”, but oh well), stamps were issued, photos were taken and we were sent on our way. Woo hoo, we’re allowed in Gabon!

We entered the baggage area and waited to collect our 6 checked bags (which miraculously all showed up). We met up with another family who lives in Yenzi and already knew the ropes. We arranged for some airport employed porters to take some of our bags (because sometimes this makes it easier to get through the luggage check with less questions) and as a large group (because sometime kids also make it easier and they have two of them, score!) we exited. We had to show our luggage tags, but no bags were opened (which is good ’cause we had a lot of food and things that probably could be “taxed”).

We’re released into the city of Libreville

Libreville is interesting. It’s part large modern city, part crumbling apart ghetto, but it’s supposed to be quite safe and have many very nice (and expensive) restaurants.

After getting settled in our hotel we decided to go have dinner at the hotel restaurant that overlooked the pool and the ocean. Not too shabby. I ordered one of the Gabonese dishes, chicken with a palm nut sauce, but was repeatedly asked/warned that it was “local meat” (which from what I can tell means its one of the chickens that normally runs around the streets), but I was all in. It was really delicious. 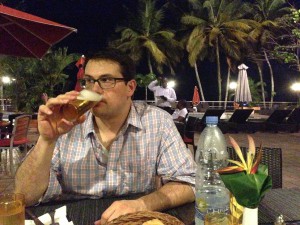 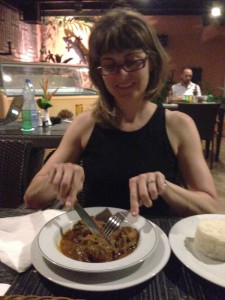 The next day we had an appointment to apply for our “carte de sejour” (residence permit). We were picked up 30 minutes late and first taken to a local market where we would get our pictures taken, which was literally a wooden booth and a guy with a digital camera and small canon photo printer. Photos done we walked a couple minutes down the street to the government building. We were taken by a guy from HR and our driver. We stood with a group of about 50 other people in a larger covered area, after about 20 minutes we were called and walked into a large non-air conditioned government building with rows of wooden benches surrounded by desks and booths. We sat for a while while the workers slowly trickled into their desks and chatted with each other. Then our HR guy took all of documents and passports and started talking to the workers. He would go back and forth between us and the workers at their desks, I guess until he got the signatures/stamps that were required and we moved to the benches on the other side of the room and waited. We waiting for at least an hour or so in the warm, stuffy room. At some point we were told to move to another section of benches and a large group of people were ushered into the spots we were sitting. After more waiting, my name was called. I went into the booth and had my picture and fingerprints taken, then a signature and it was done. I sat back down on the bench while Teun and another woman with us went through the same process. Then we were done. We would have to return a week later to collect our cards.

We had the afternoon free to do what we wished. We asked at reception if there was a nice beach nearby we could go to (as the beach at the hotel was covered in large rocks and garbage. They recommended Tropicana, so we hopped in a taxi and away we went. We had no idea where we were going or how far away this beach was. We drove through the center of town, past the airport, and after 25 minutes and down a little alley we arrived. It was really nice. It’s a hotel/bar/restaurant/”beach club”. White sand and palm trees, pretty idyllic. It would have been even nicer if I hadn’t realized after a few minutes of being there that I didn’t have my iphone. I was 100% sure I had it at the hotel. Ugh. I’ve never lost a phone before in my life. Of course it has to happen the day after I move to a country where I can’t replace it. So after we somberly drank our drinks and discussed what happened to my phone (conclusion after checking back at the hotel and all around and calling/texting it a million times, it must have fallen out of my pocket in the taxi, never to be seen (by me) again). I decided we shouldn’t let this ruin our time so we set off to walk down the beach as far as we could get. We walked for 40 or so minutes and ended up a dead end where there was an outlet from some channel/canal into the ocean. Hmmm, what to do? We could walk back. A local who was trying to catch something(?) in the outlet saw us pondering and called out to us. He indicated that we could walk through the shallow part of the water next to a wall and could climb up some rocks to get back up to the street. I was eager to try, but the look on Teun’s face was not too eager. The man indicated to take off our shoes and then led the way. Before Teun had time to protest I had slipped off my shoes and was the following the guy. He took my hand to help me balance as we crossed the underwater rocks. He showed us the way up to the street and with a wave and “merci” he was gone. It was a nice welcome to Gabon. 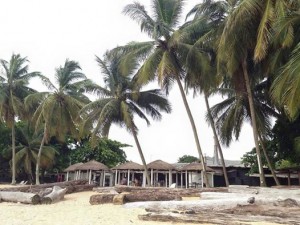 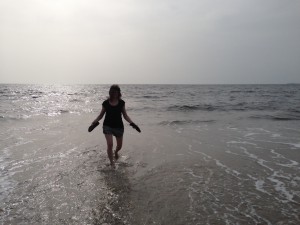 We took a taxi back to the hotel and had dinner by the pool again. We left early the next morning to catch our flight down to our new home in Gamba.